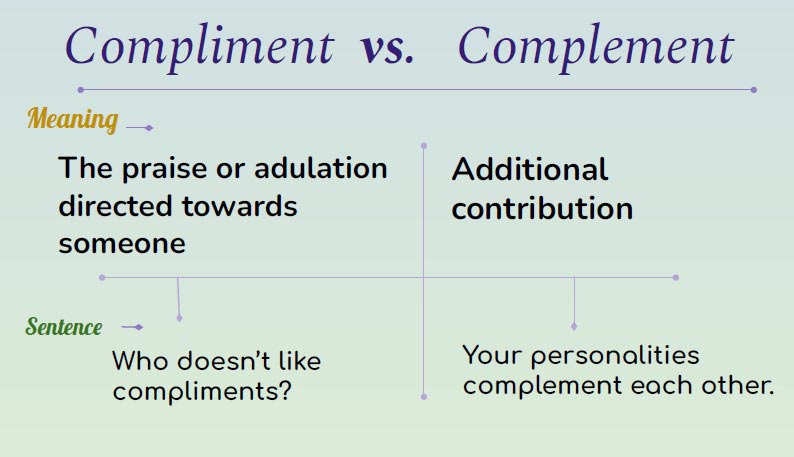 Compliment and Complement are homophones that have been confusing English speakers and learners for ages. Compliment is the ‘word of praise’ where complement is ‘to complete’ and their capacity for being interchangeably used without twisting the meaning too much creates bigger confusion than their one letter difference in spelling and identical pronunciation.

Compliment is the praise or adulation directed towards someone. It can also be a verb where throwing someone praises becomes the act of complementing.

The words of praise become the complement in this case. It is always a nice gesture to extend sweet words to someone who deserves it. That would always put a smile on the recipient’s face.

To compliment someone is the actual act of having nice words to say to them. This is pretty straightforward since the same word acts as verb and noun based on the situation they are used in.

Complement is the entity that contributes to the additional features or characteristics that complete something or the action of adding them to complete it.

The first example indicates how the specific shade of blue completes the distinctive stylistic choices which are mostly used for wardrobe-hair-makeup combination. The second one mentions two people who fit into a team perfectly because they complete each other by fulfilling their shortcomings.

Difference between Compliment and Complement

The confusion clearly borns off the identical pronunciation alongside the almost identical spelling. But the usage and the sense of the meanings are very much in line with each other and that does not help when the rest of the attributes are that close.

A handful of people do not register them as different words at all. In sense, “Complement” has a tendency to be easily replaceable by “Compliment” in many situations. One example is illustrated below -

Meaning: here, the color, blue “completes” the look she has created which would mean the color and style of clothing and makeup. This is the meaning the speaker is naturally going for.

Meaning: here, the color, blue “flatters” her entire clothing and makeup choices where the look is enhanced by adding the blue. This, too, makes perfect sense theoretically and creates a nice alternative meaning.

The example above should explain why they can often be used interchangeably. But the trouble is if you hear remarks like - “The bag complements her ‘80s look” and reckon it means “the bag is flattering to the ’80s themed wardrobe choices”, you are probably wrong 99.99% of the time. Almost every time the spelling is com-PLE-ment not com-PLI-ment and the speaker means to say “how the bag completes the style she is going for.”

Published By LearnGrammar.Net
Previous:
Who’s vs. Whose - Proper Examples with Sentences
Next:
Capital vs. Capitol - Know the Difference