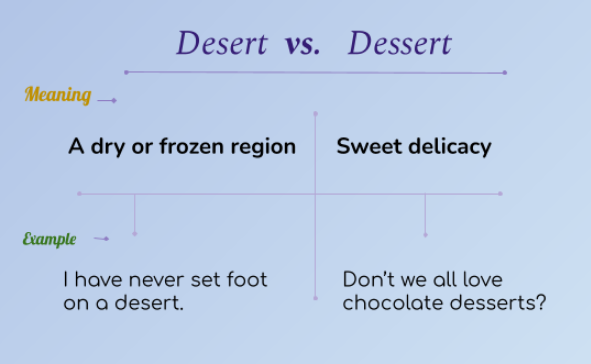 Desert is a barren wasteland while Dessert is a sweet dish. They are homophones and that causes confusion. Single and double “s” differences in the middle of the spelling can be visually deceiving which does not help solve the issue.

It is used as a noun, verb and adjective in the English language but all posit the same or similar sense of emptiness in one way or another.

Desert - (Noun) the dry or frozen region with almost no vegetation and water source.

The example above refers to one of the largest wastelands of the world where the sun reigns supreme scorching the sand for miles or the snow blizzards sending the spikes of shivers down the spine. These bare lands are nearly impossible to cultivate and there is always a far cry for running water sources among people trying to cross them on their heavy-duty automobiles or camels.

To desert - (Verb) the act of abandonment or leaving.

The examples above determine the act of leaving places and situations which is often the case when there are unfavorable conditions or environments for the people leaving. For example, kidnappers “desert” the abducted in places that cannot be traced back to them while under the cops’ radar.

Deserted - (Adjective) Where there is no sign of life or humans.

A place tagged “deserted” does not have any living being in sight. Absolutely uninhibited places are usually referred to as deserted areas. Figuratively, empty spaces too are called deserted at times. For example, “the houseful movie theater felt deserted without my friends” - the theatre was houseful but seemed deserted so the emptiness here is figurative in nature.

Light portion of food that is sweet to taste and taken after full meals is called “Dessert.” Cakes, ice creams, and puddings are among the famous desserts to be devoured after meals. Any sweet dish served on a plate can basically be categorized as dessert.

Sweet dishes are often tempting finishing touches to meals. As these dishes contain sugar in most cases, a smaller portion is served and a nice balance of sweetness is expected.

Difference Between Desert and Dessert

The shared phonetic attributes, as well as the uncanny similarity in the spelling, contribute to the confusion regarding these two homophones. By comparing them side by side it will be easy to determine their differences as well as how and where they are used in the language.

Confusion: The verb “desert” meaning “to abandon” is pronounced identically as the sweet dish - “dessert” spelled with two S’s. All the more reason to get confused while used in speech. In writing, though many cannot differentiate these two all the time, they do not need to. It is easy to get which one is used depending on the meaning of the sentence on the whole.

Published By LearnGrammar.Net
Previous:
Connotation vs. Denotation - Clear the Confusion
Next:
Farther vs. Further - Let's Not Confuse them