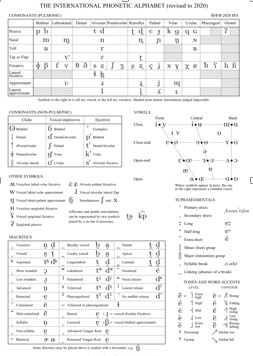 How to Learn IPA?

IPA contains a totality of 163 symbols. Every language uses only a subset of these symbols so no reason to panic. You can choose to learn just the symbols associated with your target language. It's always a better idea to get to know the IPA symbols for the language(s) you already know how to pronounce before jumping onto IPA for foreign languages.

People around the world use IPA to learn the international language, English so this article would refer to English consonant sounds and words to accompany the phonetic alphabet as examples. The consonant sounds below are articulated just like their English letter counterparts:

The consonant list below requires a bit more explanation:

Listed below are marginal consonant sounds:

The English diphthong vowel sounds are listed below:

Other Elements of IPA

Unless you dig right into the vast realm of phonetics, you can hardly fathom the depth it goes to. Common people do not require full-fledged IPA knowledge to get by unless they opt for a career in academic linguistics.

Diacritics are extra symbols added to letters. Usually, you'll find these around French, Spanish etc. scripts for even finer details in pronunciation. IPA has 52 diacritics like the accent on “é” or the tilde in the nasal vowel: “ã”. You would only have to get familiarized with the diacritics used in the English language.

IPA would help read new words with spot-on articulation at the first go. One can avoid the hassle of getting words wrong the first time and then fixing the pronunciation somewhere along the line. If you read new words with the IPA to start with, you won't have to deal with it later in the process. Fixing pronunciations later is monumentally harder.

Gain A Deeper Understanding of Phonetics

Since IPA allows a very detailed phonetic outline when it comes to articulating words correctly, one can have a very deep understanding of overall phonetics as in how different types of sound work and the speech organs function to articulate each sound in one particular language. With IPA you should know how your tongue, lips and vocal cords actually perform to produce the orchestra of sounds.

IPA in the Language Classrooms

There are a lot of advantages to learning and using IPA to learn new languages and improving pronunciations in the languages you know. People may think IPA is unnecessary but learning the script will never give you demerit points anyways.

Published By LearnGrammar.Net
Previous:
Tongue Twisters - Significance in Spoken English
Next:
Formal, Casual and Creative Ways to Say "Thank You"

Formal, Casual and Creative Ways to Say "Thank You"