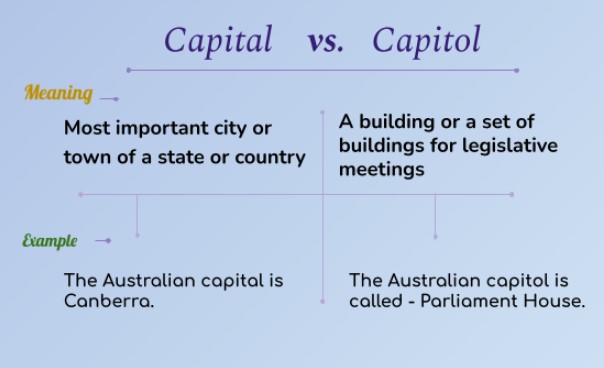 Capital is used as nouns and adjectives in the English language whereas Capitol holds a very interesting yet specific meaning aided by history and Greek Mythology.

(Noun) The most important city or town of a state or country where all the central branches of government offices are situated.

Living in the state capital is the most convenient in the entire country and that makes people from all walks of life dream of living there. Moving to the capital city is always a demonstration of earning a decent living. All the big companies wish to start from the capital and that’s why the lifestyle goes up. As the convenience goes up so do the living expenses.

(Noun) The main fund a company or business raises to finance its operations.

Every business starts with a capital that it thinks to be enough. The wealth accumulated in the company’s bank accounts is the capital it has to work with. Shortage of capital results in bankruptcy,

“Capital idea” - “Capital honor” - “Capital punishment” - the word “Capital” is the adjective here that means most significant or big in importance in these examples.

The word “Capitol” comes from Latin capitōlium - the temple of Jupiter Optimus Maximus situated on the Capitoline Hill in Ancient Rome (Present-day Lebanon). It was one of the most significant temples in the region.

(Noun) A building or a set of buildings where all the legislative meetings are held and operations conducted in a nation or state.

Capitol is the building that houses the most important legislative offices of any state, country, or territory. It can also indicate a premise that holds all the legislative buildings where state laws and regulations are discussed among the country’s top officials before they are announced and implemented.

(Noun) “Capitol” with capital C is a building situated in Washington DC, the USA where all the important legislative decisions of the United States of America are taken.

The Capitol is also known as the United States Capitol or the State Capitol is the legislative center of the entire country. It possesses similar importance as the ancient Roman temple in the USA.

The Difference Between Capital and Capitol

The two terms are tied by a similar sense of importance but are used in very different spheres. “Capital” has an array of usage across different parts of speech and various contexts where “Capitol” has a very precise meaning.

“Capital” is the city that is central to the territory’s operational outcomes when it comes to the state or country’s legislative decision-making. On the other hand, “Capitol” signifies the building or buildings that hold these discussions between a state or country's top legislators that help guide the law-making process.

Published By LearnGrammar.Net
Previous:
Compliment vs. Complement - No more Confusion
Next:
Connotation vs. Denotation - Clear the Confusion