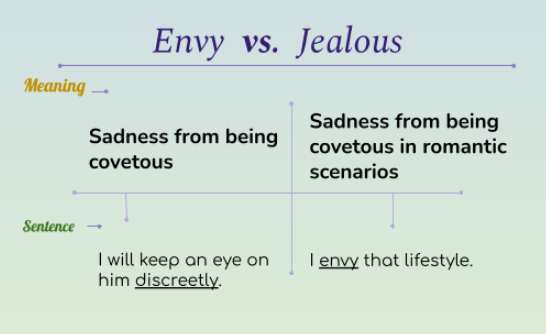 Envy and Jealousy are often used interchangeably in the English language but they have a slight difference that needs to be kept in mind. Both express a feeling of covetousness but the words are used depending on whom it is directed and the cause of the feeling.

When someone is envious of another they feel resentment towards the envied party because of something in their possession that the envious want and that results in a feeling of sheer discontentment.

It involves two parties and the bone of contention is either something inanimate (a car, a ring etc.) or abstract (achievements, talents etc.). People are usually envious of people more affluent, talented, or fortunate than them. Let’s take a look at the few examples below -

Jealousy also refers to resentful emotion towards someone and is used when someone becomes insecure about their romantic partner. Someone is jealous when they feel their partner is giving attention to someone else. It can spar from playful banter or a serious disagreement when partners have heated arguments about jealousy.

It involves three parties involving a committed or potential couple and a third party. When one of the partners enjoys a purely non-romantic connection with the third party, the other partner gets insecure thinking they may have developed a romantic connection which results in a covetous feeling. The examples below entail the correct and universally acceptable uses -

The Confusion: Envy vs. Jealousy

Envy is one of the seven cardinal sins according to Biblical teachings. It is safe to say that jealousy is one kind of envy used to express the same emotion in very limited scenarios.

The confusion is primarily bourne by their similarities in meaning but people have taken the authority to use these two words interchangeably in everyday speech. Thanks to their closeness in meaning, the listener never has a problem understanding what the speaker means. Language nerds may frown upon the incorrect usage but most people have let it slide and now “Jealous” is used in all scenarios to express covetousness. And “Envious” is reserved for more formal or literary use in non-romantic situations.

Published By LearnGrammar.Net
Previous:
Discreetly vs. Discretely - Focus on the Spelling
Next:
Loose vs. Lose - Learn Correct Spellings