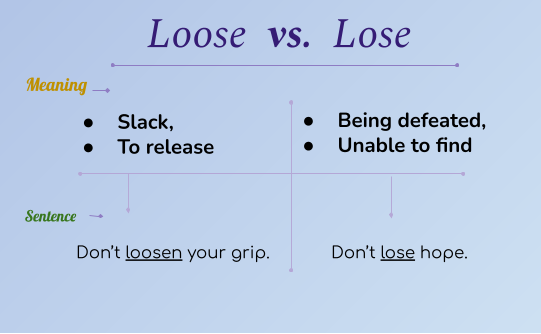 Loose is the lack of tightness where lose is to cop a defeat or inability to find something. These homophones always keep English users on their toes. There is no way to avoid the confusion than to educate ourselves about their inherent differences and how they are used in speech.

The state of slack, detached or not tightly bound is usually considered loose. Clothes can have loose in fitting or a knot can be loose in strength.

Oversized clothes are usually “loose” which means that it is not too tight for the wearers’ body frame. Loose garments are often preferred during summer for their breathable and free-flowing nature. When shoelaces are loosely tied, the feet have more space inside the shoes allowing extravagant movement or relaxation. Too loosely tied knots have a tendency to come apart easily.

The act of being released or setting free is expressed by the verb “Loose.” When something or someone is let loose, they are allowed to roam freely.

The “loose” in the examples above explains certain actions of releasing something or setting them free. The first example is quoted from the poem, “The Second Coming” by William Butler Yeats where he expresses the eminent anarchy in the world which seems like someone has suddenly let it out. The second example explains how others were left hanging when the subject released her control over the situation.

The act of being defeated or beaten by someone. In such situations, there is one party who ends up triumphant over the other as they “lose”.

The first example illustrates a sporting situation where the subject has been beaten by a hefty margin. The second one takes on daily struggles which are explained to be battles and advises to not be defeated since the aim is to win at the real war - life.

The act of misplacing something is also referred to as “losing” it. When unable to find something, it can be considered “lost.”

The first example is the inquiry into whether the wedding ring is actually vanished which usually results in further headaches of conducting search parties. The second example talks about letting go of one’s hold over their own company which leads to monumental crises in the near future.

The difference between these two words may be hard to remember but putting them side by side in a comparison table can always help. Pinpointing their finest differing factors and listing them like this can also help avoid misspellings in the future. Let’s take a look at the following comparison table -

Published By LearnGrammar.Net
Previous:
Envy vs. Jealousy - What's the difference?
Next:
Laid vs. Layed - Know the Correct Spelling