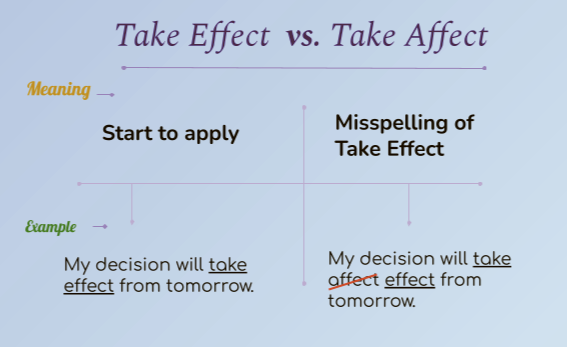 Take Effect and Take Affect are commonly confused phrases in the English language. We need to first clarify the meanings of the words “Effect” and “Affect” before going into the corresponding phrases. Take Effect with an “E” is the right phrase while the Take Affect with an “A” is almost always a mere typo.

Effect is the noun and verb that refers to the change brought on as a result of something. Take Effect is a phrase that means “Come into action” or “Start to apply.”

The first example mentions the rules have changed and it will start to apply from a certain point in time and the second example also states a time frame from when a system will begin to function.

Affect is a verb that means to be effected or impacted (negatively) by something or someone. It also means to pretend to possess or feel something. But there is no phrase like “Take Affect.” This is merely a term commonly mixed with Take Effect.

Both the examples clarify that take effect makes more sense and “Take Affect” would be the incorrect phrase to use. “Delivery date” and “Decision” started to apply from a certain point and that is the perfect use of Take Effect.

Take Effect is usually the same as starting to effect but take affect is a mere incorrect term for it. If you have come across a phrase where take and affect sit side by side, that is purely because someone has made a mistake or typo.

The Trick to Differentiate

It can be a good trick to remember that Effect is more commonly used as a Noun so it needs “Take” to become the Phrasal Verb Take Effect while Affect is basically a Verb so it would not need the help of the “Take” before it so Take Affect is incorrect.

Published By LearnGrammar.Net
Previous:
Laid vs. Layed - Know the Correct Spelling
Next:
More Than vs. More Then - Let's Not Confuse The Spellings