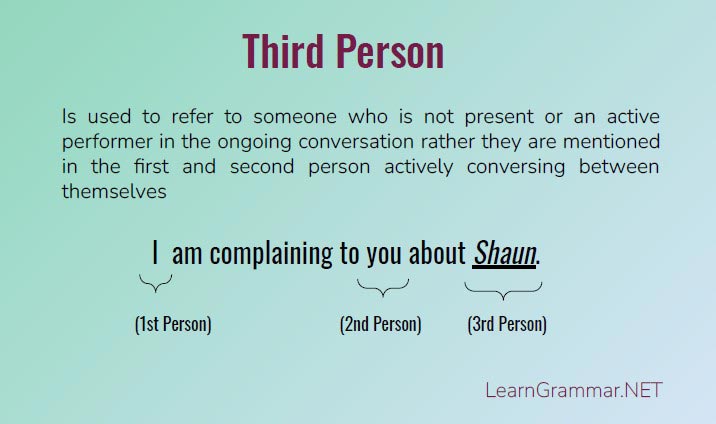 There are three persons - First, Second and Third, in the English grammar and all three of them have singular and plural Personal Pronouns. The Third Person is used to refer to someone who is not present or an active performer in the ongoing conversation rather they are mentioned in the first and second person actively conversing between themselves.

It is often a good idea to figure out the First and Second person first before determining the Third person. There is a reason why it comes third in the sequence.

First Person:  The one talking

Second Person:  The one being talked to

Third Person:  The one being talked about

Mila is the one complaining here so she is the First Person while Rachel is on the receiving end of that complaint so that means she would be the Second Person. Shaun is the absent party who is the center of the conversation so that makes him the Third Person here.

Mostly, when someone is referred to by name in a conversation, s/he is Third Person Singular and the Verbs agree as regulated.

The Auxiliary Verb - “is” placed before “running” determines the fact that the Noun, “Dave” is Third Person Singular Number here.

The Verb “to have” here is “have” after the Plural Noun - “Mel, Josh and Kate” and that would make it Third Person Plural in nature. “Have run” is in the Present Perfect tense and the “Run” sitting after the “Have” is in the Past Participle form of the Verb - “Run”.

1. Has Rob looked into the matter regarding Haley?

4. Are we going to the movies with Ron’s friends?

5. They will let us know if we are expected there.

Published By LearnGrammar.Net
Previous:
Infinitive: Definition and Types
Next:
Types of Questions: Open-ended and Closed-ended