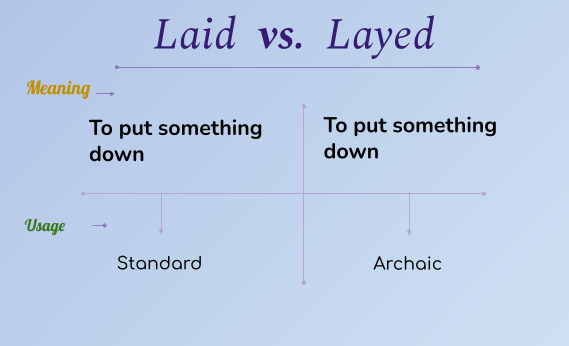 Laid and Layed are two different variants of the same verb tense of the same word - LAY. They are homophones as well but standard English frowns upon the usage of Layed since the up-to-date version of it is Laid.

Laid is the Past Indefinite and Past Participle form of the verb - Lay meaning “to put something down carefully.” It has a few corresponding meanings in the line of “to put,” “help someone else to lie down,” “set something in position” etc. It also means the act of producing eggs from the reproductive system which crack to let the offspring out in time.

Example number one explains the act of laying someone else down (or “something” if it is a dead body). The second one explains a bird laying eggs and the third is a more abstract idea of setting a plan or creating a formation.

Layed is the extinct or archaic form of the Past Indefinite and Past Participle form of the verb - Lay. That means there was a time when English language users used Layed as the standard Past Indefinite form of Lay. To refer to an era old, people still use Layed instead of Laid in their writing. Otherwise, Layed is officially out of use as of now and Laid and taken its place.

For standard and formal use, using Layed instead of Laid may cause a few points to be deducted even though most people still take both forms of the word to be acceptable. Example number one is an excerpt of a conversation between a potential employee and employer where the employer is a language nerd, the employee would surely fail to impress them. In the second example, the speaker may choose Layed to match the archaic setting of the narrative set in the Georgian era.

The Difference Between Laid and Layed

Since both are different forms of the same word and mean exactly the same thing, Laid is the standard Past indefinite and participle form of Lay and Layed is its archaic version. Both are theoretically acceptable in the English language but LAID is preferred by most people so it is always safer to opt for it.

The recent wave of inclusion and diversity is subtly allowing both these terms to be used to mean the same thing though not all dictionaries are ready to include LAYED as an acceptable word.

The comparison table is added to help differentiate between these two confusing terms. Let’s compare Laid and Layed side by side -