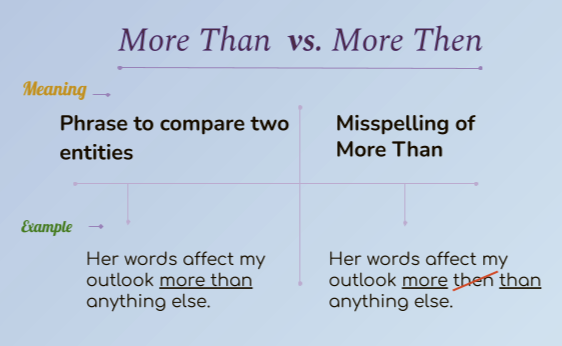 More than is a phrase used for drawing comparisons between two or more things. More then, on the other hand, is a mere misspelling of “more than.” Be careful of your A’s and E’s and you should be clear of making these spelling mistakes.

The phrase “More than” or “More…than” is used to imply comparative attributes to two entities where one is greater in quality or quantity than the other. “Less than” is the exact opposite expression that signifies smaller or tamer.

“More than” compares how price hike affects two socio-economic groups the poor and the rich differently in the first example. The second example compares the amount of food the subject eats and wastes with the help of “More…than”.

Do it Yourself: See the construction (whether the “more than” or “more…than”) of the third example and figure out what it compares.

It is a misspelling of “more than” and there is no use of the phrase “more then”. You should not have seen the word “then” with an E come after the comparative modifier “more” in English. The fact that you see them together often is because of typos or misspellings.

Difference Between “More than” and “More then”

The similarities in phonetics and spelling between the words “than” (used to compare) and “then” (means later) are the main culprit here when it comes to the unnecessary confusion caused by the misspelling every once in a while.

“More then” lacks any meaning whatsoever where “more than” is used is comparisons pretty heavily across all spectrum of topics in the English language. Typos are the only thing aiding the already existing tendency of their confused existence in the minds of the English learners and users.

The comparison table below can illustrate the unequal contest between these two phrases. It will show how mindless it is to even draw comparisons between one overtly used phrase against a mere misspelling one that same phrase. But this table will surely help you remember which one to use and which one to avoid.

Learning the spellings of words and phrases with proper meanings and associations can cure mindless confusion with imaginary words or word clusters to make our language learning journey a lot smoother. This article should help burst all the confusion regarding the correct spelling of the phrase - “More than.”

Published By LearnGrammar.Net
Previous:
Take Effect vs. Take Affect - Know the Correct Spelling
Next:
Accept vs. Except - Which One to Use?