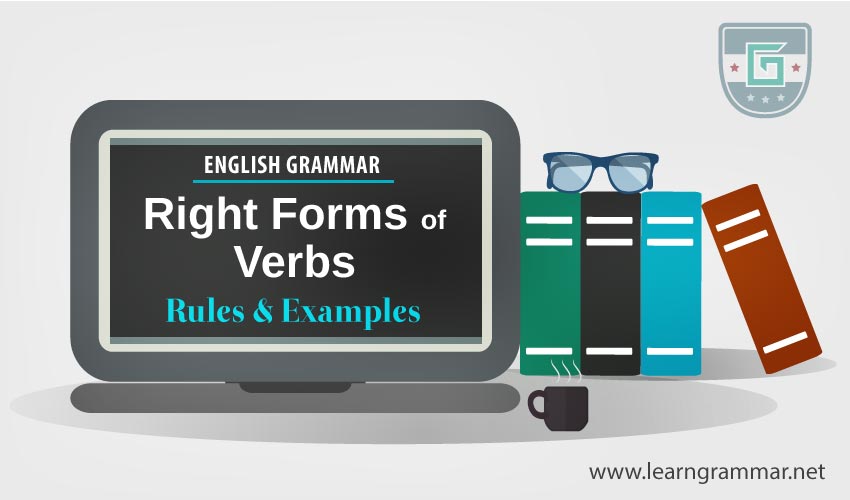 The verbs are the most variable element of the sentences. The right form of verb encompasses most of the grammatical rules of English language. Every element of a sentence eventually relates to the verb. The verbs appear differently in a sentence on the basis of their subjects (subject-verb agreement), tenses, moods, voices, different structures, modals, etc.

Note: Participles (without auxiliaries), infinitives, and gerunds do not work as the verb in a sentence. Gerunds work as nouns, but participles and infinitives work as adjectives/adverbs.

Subject-verb agreement: the verbs are customarily followed by the subjects, and they must agree with the subjects according to their number and person. See the rules of Subject-Verb Agreement.

The variability of the verbs mostly depends on different tenses of the sentences. A form of verbs depends on the time the actions have been performed. See the structures and details of The Present Tense, The Past Tense, and The Future Tense.

The verbs are also related to the structures of different sentences and clauses. A clause has only one verb. In fact, a clause cannot contain more than one finite verb but can have participles (without auxiliaries), infinitives, and gerunds.

Clauses can be connected by conjunctions and connectors. Some connectors take some specific forms of verbs. Conditionals use the conjunction if and it has some different sentence structures. See conditionals.

The connector since has two usages.

No sooner had, hardly had, scarcely had, etc. are the adverbials that require a past perfect tense and a past indefinite tense for the sentence.

Coordinating conjunctions (and, but, or, yet, so) and although/though, as, because, till/until, when, whenever, as soon as, while, which, what, that, etc. connect two clauses which have the verbs of the same tense.

The conjunction lest requires a modal should in the following clause regardless of the tense of the first clause.

Modals always take the base form of the verbs after them. See Modals for details.

The clause ‘it is time’ or ‘it is high time’ requires a verb in the simple past if there is a clause after it.

The conjunction as if/as though takes simple past/past perfect tense in the following clause.

Prepositions, articles, and possessives are always followed by nouns or gerund form of the verbs.

To is the only preposition that takes the base form of the verb. However, there some phrases with to being at the end of them, which require the gerund form of the verbs.

To be, being, having, getting, etc. are generally followed by the past participle form of the verbs and other adjectives.

*Note: Get takes the next verb as infinitives/past participle.

Note: There are some clauses also which require the verb of the next clause to be in base form.

Since a single clause cannot take two verbs, it usually converts the additional verbs to complement by making them infinitives or participles or gerunds.

- Some verbs always take the additional verbs as a complement by making them infinitives.

Verbs followed by the INFINITIVES

Verbs followed by the GERUNDS